Blood on the Motorway – Now with wide paperback distribution

Blood on the Motorway, the apocalyptic British horror trilogy by Paul Stephenson, is now available in brand new paperback editions from Hollow Stone Press. Originally published in ebook in 2015, the first book in the trilogy has been downloaded over 170,000 times, has 300 global reviews on Amazon with a 4.4 star average, and has been described as ‘gripping from the first page.’ The new paperback versions of the trilogy’s three book run are presented in UK B-format paperback with groundwood paper and matte cover, with cover designs by the author, and distribution through Ingram. They are available to all good bookshops and libraries, both in print and ebook.

“I loved the Blood on the Motorway series, it has everything you could want in an end-of-the-world story.” – Elisabeth Carpenter – Bestselling Author of 99 Red Balloons and The Vacancy.

About the Blood on the Motorway Trilogy

An apocalyptic storm. A killer on the loose. The battle for humanity’s survival starts here.

Tom is a layabout ex-student waiting for his life to start or the power to get cut off, whichever comes first. Jen works two jobs, hates both, and most days is too hungover to deal with either. Detective Burnett is trying to work out who the hell turned his sleepy Yorkshire village into a murder town.

When the skies fill with a mysterious storm, each of them wakes to find streets filled with dead. The world they knew has gone, and their old lives with it.

Tom finds himself at the mercy of a deranged soldier, Jen has to flee the fires burning her city to the ground, and Burnett must track down a killer who sees the apocalypse as an opportunity for more mayhem. If they can’t band together, the fate of what remains of humanity hangs in the balance.

Blood on the Motorway is the first in the British apocalyptic horror trilogy readers have called “gripping from the first page’’. If you love edge-of-the-seat action, end-of-the-world tension, and characters you’ll be rooting for with every turn of the page, you’ll love the first instalment in Paul Stephenson’s apocalyptic trilogy.

Pick up Blood on the Motorway today to start the epic journey of murder at the world’s end.

Paul Stephenson writes pulp fiction for the digital age. His first series – the apocalyptic Blood on the Motorway trilogy – has been an Amazon bestseller on both sides of the Atlantic, and his work has been featured on the chart-topping horror podcast, The Other Stories. He is also the creator and narrator of Bleakwood, a horror podcast, and a co-host of the All Creatives Now podcast exploring creativity in the modern world with fellow horror author, Kev Harrison. He lives in England with his wife, two children, and one hellhound. 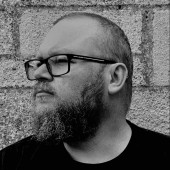 Paul writes pulp fiction for the digital age. His first series - the apocalyptic Blood on the Motorway trilogy - has been an Amazon bestseller on both sides of the Atlantic, and his work has been featured on the chart-topping horror podcast, The Other Stories. His new series, The Sunset Chronicles, is a dystopian sci-fi thriller that will delight and terrify fans of science fiction and horror alike. He lives in England with his wife, two children, and one hellhound. He is also the proprietor of Hollow Stone Press.

Get the complete second season of The Sunset Chronicles

This site uses Akismet to reduce spam. Learn how your comment data is processed.

Success! Check your emails, your free book will be on its way.